No, I am not hinting at anything. My tiny sister-in-law Marie just gave birth to a 9 lb 6 oz baby. Ouch. And blogged the whole thing since she decided to do a home birth. Yes, chicks are tough and rule. However, you can bet your pretty bottom that if I ever have a kid, I’ll be in the hospital with an epidural and no cameras please. 😛 LOL So now I have another niece! Girls definitely run on both sides of the family. On Jason’s side there are now 5 nieces versus 1 nephew. On my side there is 4 versus 1. My sister’s boy is itching for a boy to play with. Hahaha.

I guess I do have a bundle of joy to share, but it is more of an electronic nature. I decided to purchase a bodybugg from my gym to help with my weight loss. I haven’t set it up yet, but it is the neatest thing. You wear it around your arm like an mp3 player and it’s got all these sensors to track your heat, perspiration, movement, etc to determine your calories burned throughout the day. I haven’t heard anything negative about it, minus the cost (but if you want results…what can you do?) ….so here goes nothing. 🙂

Got to love the games they come up with on these variety shows…I nearly peed in pants laughing so hard….. 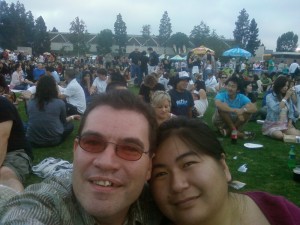 It’s been sometime since I’ve been to a concert, so I was super amped on Sunday to go see Jack Johnson at UCLA on their intramural fields. I should have known better and honestly should have called the ticket office instead of assuming what the set up will be like. With rules of no chairs or blankets allowed, I naturally thought maybe they were going to have fold up chairs set up. But no….big empty field. Poor hubby. He doesn’t like standing at concerts and here we are having to stand! I sucked it up and bought a $25 Jack Johnson towel so that we had something to sit on at least for most of the evening until Jack came on.

There was a lot of weed smoking which was a little disconcerting with a decent amount of kids and pregnant women walking about. (I hope you were not around any pot smokers, Nanette!) It was also very sad to see all the trash on the field after the show. With all the emphasis on the environment and being green, I was surprised how everyone trampled over the trash without a care in the world.

In spite of all of that, it was an awesome show! Miss Angela, I wish you could have been there…I know you would have loved it. I thought of you when Jack busted out the ukulele. 🙂 He had two opening acts, Culver City Dub with guest Paula Fuga and Rogue Wave. Rogue Wave was okay, just not my cup of tea. Culver City Dub had a very soul/reggae/jazz/funk vibe to them and I loved the trombone action. The best of all however was Paula Fuga hailing from Hawaii. She has got the most amazingly pure and beautiful voice. I recommend everyone to check her out!!!!

And then of course there was Jack! He was fantastic. It was our first time seeing him in concert and I am glad that he sounds just as good live as he does on cd. He sang just about every song anyone could want to hear…except our wedding song. LOL 😛 But it’s okay 🙂 🙂 All the songs were wonderful and it was adorable to hear him talk about his wife and kids. And his band member Zach Gill can play a mean piano and an even meaner accordion! Loved it all and can’t wait until he goes on tour again.

Next up….Amos Lee this weekend!